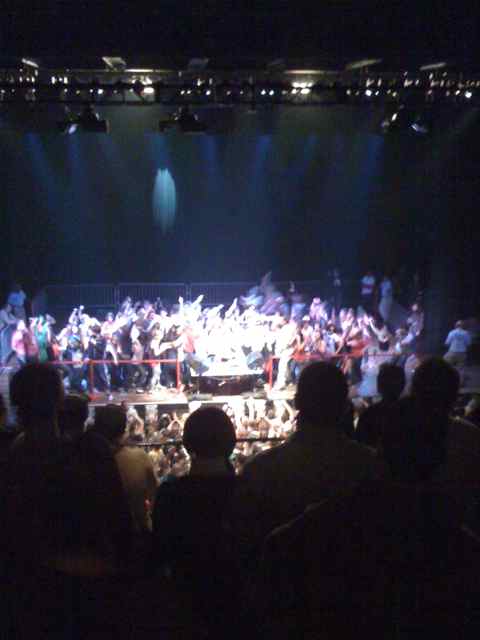 Last Thursday, Jen, Brandon, Kim, Jimi, Katherine, Alex, and Mikey went out to The Pageant to check out Girl Talk, who — if you don’t know — is a DJ that mixes popular songs from all genres together to make sprawling, catchy party albums.

Before Girl Talk could come out, there were two openers. Hollywood Holt is a Chicago rapper (I guess Chicago Holt doesn’t have quite the same ring who was pretty good and very entertaining. Plus, he took off his shirt, and the ladies liked that quite a bit. He also defined the term “juking”, which is what people in Chicago call “hump-dancing” or, more commonly, “freak-dancing”. This was very useful to know, as there would be much juking later on in the evening. The second opener was Grand Buffet, a white rap duo from Pittsburgh. They were… well… I don’t want to hate, but I liked them more at the beginning of the set when I didn’t think they took themselves seriously. At the end, when the fat guy had ice thrown at him and he said he was going to “murder someone tonight”, well, that was a shame. It showed that they take themselves very seriously, which is too bad because they weren’t very good. Plus, the last time Girl Talk came to town, there was a tasing after the show. Was Grand Buffet opening then too? Have they moved up from tasing to shooting? Was ice involved? We’ll never know.

Anyway. After the openers, the roadies came out and put a table at the very front of the stage, with a laptop, assorted electronics equipment, and two monitors strapped down to the table. We had gathered by the cattle railing around the edge of the stage and the tensa-band queue poles in the front that they were going to let people up on stage around Girl Talk (plus, I had seen photos in Rolling Stone that had confirmed that as well). Other than that, we really didn’t know what to expect from a laptop musician. I had heard that he actually mixed live, but I don’t think that could possibly be true. More likely, he queued up previously made mixes and ran the party like that.

And what a party it was. The under 21 contingent was out in full force that night, which made the balcony (and the bar in the balcony) a much more enjoyable experience than usual. There was a ton of dancing going on, and while I did shake my groove thing from time to time, most of my movements were limited to shifting from foot to foot, head bobbing, and that rap thing where you point with two fingers in time to the punch lines and make your rap face whilst rapping along.

Exhibit A – My rap face:

Back to the mission at hand: I really enjoyed the concert. There was some dissension amongst party members that the show made them feel old, but I really enjoyed getting out and people watching. Sure, dance parties are probably more fun if you are on all kinds of drugs, but I’m definitely too old for that shit. Here is a review from the RFT if you want a blow-by-blow of the evening. Be sure to check out the slideshow for pics of kids losing their minds dancing. It was pretty awesome.