Last weekend, some good friends came down to visit us before moving to Hawaii. (You read that correctly, Hawaii. I hate them right now.) Well, their little boy, Alexander is just shy of 3 and has never ridden the train so how perfect? Ride the train from KC to STL and see some friends.

I was a little concerned how Kuma would react to having a “fur-less, two-legged puppy” running around her domain but it wasn’t a problem at all! I couldn’t believe how good she was around Alexander. She tolerated the high-pitched screeching, the aggressive petting, the tail-pulling and even him sitting on her back once. He would constantly feed her treats and human food and she would ever so gently, take it out of his tiny fingers, not even a little nibble on his skin. I was so proud of her. I guess all the times I’ve squished her, pulled her tail, tugged on her ears, just torturing her prepared her for the presence of children. Awesome!

Saturday was a full day of fun for the Doyles. We took them to the Zoo. We went into the Children’s Zoo where Alexander got to pet some goats and guinea pigs:

I got to pet a chicken and a llama:

Got eaten by a hippo:

And had a otter photo bomb us:

We then all rode the train to Big Cat Country (remember, Alexander loves trains):

And saw the newest addition to the Zoo family (he’s so gangly):

From the Zoo, we had lunch and then drove down to The Magic House. Okay, if you have children, you HAVE to take them to the Magic House! There are things for everyone, including the big kids! Now, Alexander mostly stuck in the toddler section and as exciting that is for Bob and me, we thought we would explore the rest of the place.

We spent quite a bit of time in the Bubble Room:

Had to touch the electrostatic generator:

Tested our reaction time (which I beat Bob, by almost a second)

And saw the future:

And wouldn’t you believe it? It’s part of the STL101! Remember that little project?

54. At the Magic House. The four-floor Kirkwood kiddie landmark includes everything from a mirror maze to an art studio to a science lab, all predictably pint-size. A visit there can turn the everyday into the enchanting. And the Van de Graaff generator can be downright hair-raising—but in a good way.

Of course, you have to top off the trip to St. Louis with Ted Drewes!

Laura, Freddie and Alexander, it was so great that you guys got to come down and spend the weekend with us. We had such a fantastic time and we can’t wait to come out to Hawaii to visit! I’m saving my pennies!

And for some more photos of our weekend, just click here.

A while back I had heard that the creators of Penny Arcade were stopping by St. Louis to chat with us, I thought it was a perfect opportunity for the Supper Club to try a new restaurant and check out the talk. Shh, don’t tell anyone, but we’re secretly geeky (who am I kidding, it’s not that much of a secret).

The restaurant choice: The Royale

Salmon on the Mount

Okay, everyone absolutely raved about their own dishes. I had the grilled-cheese sandwich and it was excellent with the tomato and basil pesto. Just the right amount of melted cheese that it didn’t string too much when eaten. I had a bite of the fish tacos and they were very flavorful and tasted so fresh. The breading-crabmeat ratio was perfect for the crabcakes and the salmon was cooked perfectly. I was also a fan of the sweet potato chips that came with my meal. Some were a bit overcooked but the rest were great. If you’re out and about in South City and it’s beautiful weather, head on to the Royale for some enjoyable food and laid-back atmosphere.

After dinner, we headed over to Mad Art Gallery to catch the end of the talk. When we got there, the Penny Arcade guys were taking questions. The illustrator, Mike Krahulik, had a PC tablet projected on a screen and while Jerry Holkins talked, he would be drawing anything from Gabe and Tyco to penises. Since I only knew about half of what they were talking about, I was very entertained by the drawings that Mike quickly threw out. I’ll be honest, I thought that it wouldn’t be very crowded but I was very surprised to see the entire gallery packed like sardines. I mean, when we walked in, I was reeled back by the intense amount of body heat from the room. There were more geeks than I thought that resided in St. Louis. I do have to say, Bob was probably one of the most well-dressed and “coolest” guys there (and that’s really not saying much, so you can imagine who attended).

After the talk, we waited around to get their signatures on their newest release:

How cool are these autographs? 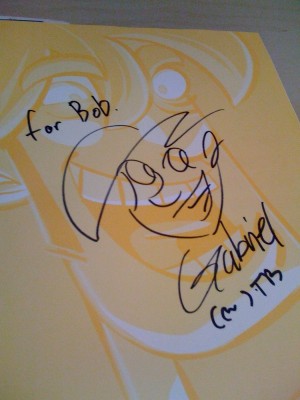 Well, then to finish off this evening, a quick trip to:

Sometimes, you say to yourself “I should do this thing before I miss my opportunity.” Sometimes, you get around to doing it, and sometimes you don’t. Chuck Berry is a St. Louis legend, the father of Rock ‘n’ Roll and the first person elected to the Rock ‘n’ Roll Hall of Fame. He’s been playing monthly shows in the Duck Room at Blueberry Hill for pretty much ever, and we never got around to going. With the announcement of his performance at The Pageant, we decided we could not let this opportunity slip, gathered a posse and hit the town.

Of course, we couldn’t see a legend on an empty stomach. The seven of us (Andrew, Beth, Kate, Katie, Kim, Jen and myself) took an early dinner at Ranoush, a Middle-Eastern joint located where the esteemed Saleem’s used to be. With our large group, the proprietor suggested a family-style feast. A huge spread of mezes (small plates, appetizer-like dishes) were brought out on two platters: hummus, tabouli, falafel, baba ganoush, and foul moudames with pita bread to mop it up all up.

We were warned not to fill up on the awesome appetizers, but of course, we could not hold back. Only when the main course came, did we realize our folly. The main course was a huge mound of beef and chicken kebabs, grilled together with shrimp, onions and peppers. So good!

Just when we thought we were done, the baklava came out to end the meal, and it was hella tasty. Sweet and flaky … mmm! A rosewater tea was the grand finale, and we waddled down the block to The Pageant, satisfied for sure. We will definitely be back to Ranoush, and we would recommend the family style meal to anyone.

We made sure to get to The Pageant early; not only was it was a sell-out, but our friend’s brother’s band The Rugs were the openers. It was extremely trippy to see a person you know rocking on the stage of The Pageant. They churned through 45 minutes of energetic garage rock before yielding the stage to Joe Edwards. The don of The Loop, Edwards gave a warm welcome to Chuck and out he ran, spry and agile for an octogenarian. Now, I don’t want anyone to get it twisted: as far as musical performances go, this won’t be making any top five lists, but Chuck has always had a rep as an erratic performer, and the dude is 83 for chrissakes. We weren’t expecting anything other than a quick run through the hits and that was pretty much what we got. The highlight of the night was the sing-along during “My Ding-a-Ling”, and that kind of says it all. Despite the rough edges, I’m not sure there is anything more spine-tingling in my world than the first bars of “Johnny B. Goode,” and that did not disappoint.

So yeah, Chuck Berry isn’t exactly in his prime, but he was past his prime on the day I was born. It was a thrill to see him and I’m glad I got a chance to pay tribute to one of the all time greats.

After the show, we popped into FroYo. This is only really mentionable because it was my first time there, and I am a convert for life. Delish!

We know, we’re not Catholic, but something compels us to attend a fish fry each Lent. There is something that tells us we must consume fried fish and drink beer in a crowded church hall.

Last year a bunch of us went to St. Richards for their fish fry and we repeated that act again this year. The reason why we chose this location is that it’s super-close to our house and we don’t have to fight for parking. All we have to do is trespass a neighbor’s yard. The police can’t arrest us for walking under the influence. Well, this year, I ended up gorging on cornbread and fried cod (the cornbread was like a dessert, very addictive) while Bob kept going back for more fries. A friend ordered the catfish and apparently it was the better choice. I’ll have to remember that next year.

If you have never experienced a fish fry in St. Louis during Lent, it’s a must. If not for the food, then for the fact that you will smell like fried food long after leaving.