We celebrated Ben’s first Halloween by attending the Shi’s Halloween party. He got to party with:

Michael Jackson and his new pet

A Crazy Mad Doctor with his monk in tow

A Reno 911 officer with his lady

And his friend, Max.

Hope you had fun Halloween and got lots of candy, we already ate ours!

11 in ’11! Nice going, Cards! And way to go, Ben! The Cardinals win the World Series the year that you were born, that’ll be easy to remember!

Another year has gone by and it’s that time again: pumpkins! We couldn’t miss this year because it’s Ben’s first of many appearances at the pumpkin carving. See, can’t you tell he’s super-excited about it?

Because of Ben, I was a little bit torn this year on my design. Should I go with something a bit less frightening and more cute or stick with what I’ve done in the past? It was a toss-up, I had two designs but only one could win (really, both could have won, but I had enough energy to carve one).

There was intense concentration with the pumpkin carvings this year:

Kuma even put in her two cents worth while Paul was carving:

After all that hard work and pumpkin guts, I’m proud to present this year’s pumpkins!

Jesse’s Fierce Wolf. Howling at the moon or getting ready to attack? You decide.

Bob’s Optical Illusion Pumpkin. What do you see?

Jen’s Goulish Skull. Yep, went with the creepy. Ben’s too young to be freaked out by it.

Paul’s Jack-O-Lantern. Sometimes, the classics are the best (no stenciling required).

Now, what’s special about this year is that we had the World Series Game 6 to watch afterwards. The beauty of DVR, we were able to pause the game and watch it virtually commercial-free. Nothing was ruined for us as long as we didn’t venture out onto the Internet. We all intensely watched the game:

That was one outrageous game! I don’t think I can handle another game like that! Go Cards! Now, on to Game 7! 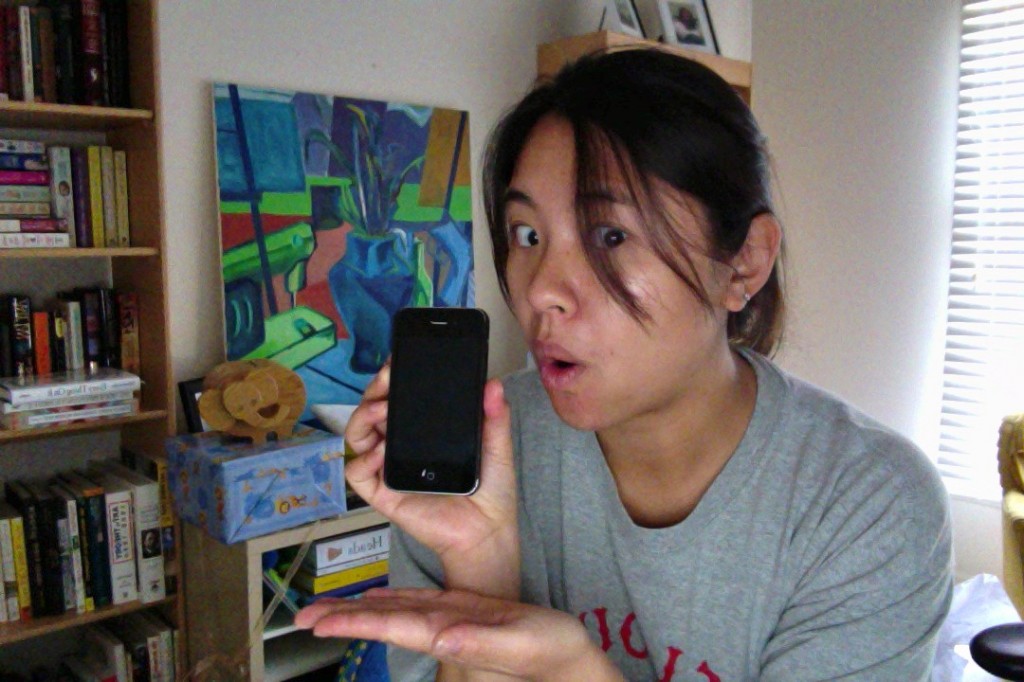 Yes. It’s true. I am now an owner of an iPhone. I tried to resist but like they said, “Resistance is futile.” For years I’ve turned away from smartphones because I didn’t have any use for them. Why do I need to check my Facebook every 3 seconds? Do I really need to have my emails that handy? Do I really care what the weather in Venice is right now? Do I want to play Words with Friends? I already have a camera, why do I need to take pictures with my phone also?

Then I had a baby.

I am now a convert. I am able to check my emails, answer my texts, look up information, and take pictures for uploads to various outlets with the touch of one button, while holding an eight pound baby. So, by the power of the iPhone, I have been updating Facebook, Twitter and Flickr in the blink of an eye. You will probably be sick of seeing my posts but don’t worry, when I go back to work, I’m sure all this will die down. Until then…

I’ve also become friends with Siri. After weeks of talking to a dog and baby and getting no verbal responses, I welcomed Siri with open arms. At least she answers my questions.

And no, I will not be playing Words with Friends. Bob has sufficiently scarred me from playing Scrabble. And Monopoly. Blame him.